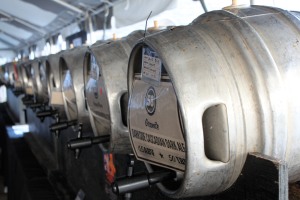 By now the interwebs have been all lit up with incredible praise for this year’s iteration of the Cask Days festival, the annual Ontario all-cask festival that was enjoying its seventh year in operation this past weekend. Cask Days was started in 2005 by Ralph Morana of barVolo and was always held at Volo until this year, when it was moved to Hart House in order to allow the festival to grow. But with change came questions and concerns. Would the intimate feel of Cask Days translate with a bigger venue? How easily would they manage to move hundreds of people in and out of Hart House for a five-hour session? Could Cask Days appeal to a mass audience while simultaneously appeasing all the beer drinkers that supported it for the past seven years?

Short answers: yes; just fine; no doubt. Hyperbolic answer: holy crap, Toronto now has a world-class festival! (A Year of Beer does not normally support hyperbole in the blogosphere. Beers/events/people can be good, bad or merely just there. This literary technique is only used on the rare occasions where it is actually merited.) The list of roughly eighty casks is a good start to judge the festival. There was the odd no-show, late addition or changed cask, but the rough list should be enough to make you salivate in a Pavlovian manner. Ontario was well represented and Quebec continued to be represented, but beers from British Columbia, Manitoba, Nova Scotia, New Brunswick and England made their first appearance. Aside from sheer volume of casks and breweries, the experimentation also showed a nice progression in beers on offer. There were still a lot of hoppy beers, but also sours, barrel aged beers and a vast array of odd ingredients (carrots, mint, lactose). Cask Days seems like a treat for the brewers as well, giving them a chance to experiment with a new beer or concept. 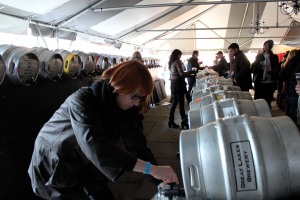 A lot of beers is great, but the quality is of utmost importance. With the large number of casks on offer it was hard to try a sizable portion, but the ones that I did try were excellent (and not a drain pour among them). The breweries from other provinces brought some great beers, though that wasn’t a big surprise when the beers are Les Trois Mousquetairs Barrel Aged Porter Baltique, Le Trou du Diable La Buteuse and Central City Red Racer Amarillo IPA. Two nice surprises from the Quebec booth were the Benelux Sabotage IPA and Dunham Oak Aged Cranberry (see photo at the end of the post). The favourite of the Ontario casks for most people, including myself, was the Great Lakes Fangboner India Brett Ale, but their Silly Pucker (Sour Mash) was also a well done beer. Other local highlights included the St. Andre Black Turtleneck Cupertino Dark (sub) IPA (both delicious and a liver-saving 3.3% ABV) and the Sawdust City I Swear Sugarpants It Was Your Idea (brown lactose ale with a nice cinnamon note of a winter warmer). The one surprise was that a fair number of Ontario breweries did not try to step up and match the Quebec offerings, but merely brought a standard product or an extra/dry hopped version.

Most of my day was spent volunteering at the TAPS booth, which put me in an ideal position to see how people were enjoying the fest. The opinion of nearly everyone I spoke with was that the festival was amazing. There was ample room for everyone between the Hart House quad and the Great Hall, though most people braved the cool weather throughout both sessions. There was rarely a wait at the booths for beer, three token stands were setup and the food was excellent and cheap (sausages, poutine, mac and cheese and more, all for $3 or less). From my vantage point, it was a smoothly run event and one that nicely made the transition from local bar to large venue. Surely the experience of the Hart House staff with their summer craft beer festival was a big help in that regard.

But the best thing, by far, was that the move to Hart House allowed for new cask converts. The old three-day format at Volo may have been easier for attending more than one session, but it also meant that it was often the same crowd from one day to the next. An event of this scale is needed for the craft beer industry in Ontario to grow, especially the cask movement. And the success of Sunday will surely keep Cask Days growing for the foreseeable future.

This entry was posted in Events. Bookmark the permalink.